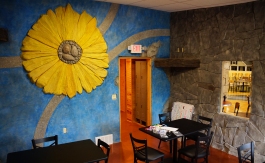 The misty, almost ethereal cloud rolls rapidly up and over the rim of the stainless steel bowl and within seconds the cream at the bottom of the bowl has been flash-frozen into the beginnings of a dish of the freshest ice cream I’ve ever had in my life. A few chunks of chocolate and Reese’s peanut butter cup are dropped into the bowl, a few squirts of chocolate and peanut butter go liberally across the top and then some mad churning with a stainless spatula that looks like a putty knife blends the flavors together. Mr. Nico Dimas from Kissimmee, Florida has just hand-crafted a glorious cup of ice cream treat for me in less than 30-seconds. Welcome to Fire & Ice Pizza & Cream of St. Joseph.

You can get your own version of this amazing new treat yourself starting Monday, June 29th…just in time for the 4th of July holiday. Owner & Operator Lori Costanza had originally hoped to be open for the Memorial Day holiday, but all the prep work took a little more time than she had anticipated.

Final inspections from the Berrien County Health Department are complete, the building inspector is due in later today, and Lori and crew will throw open the doors at 3848 Niles Road in St. Joseph on Monday for what they hope will be a long and fruitful run at a decidedly family-friendly place of business that will mystify people of all ages.

Fire & Ice Pizza & Cream creates instantly flash-frozen treats right before your eyes at temperatures up to 328-degrees below zero. Large liquid nitrogen tanks supply the magic and Lori’s skilled ice cream artists do the rest for you. Nico has been teaching them the art. He is a manager at the Abracadabra Ice Cream Factory in Kissimmee which caught the Costanza family’s attention during a Christmas vacation to Florida.

The life-changing adventure for the entrepreneurial family from Sodus has been a fast-track ever since. They were so enamored with the concept while touring the region they went back a second time and found the business packed that time, too. They launched their research on the concept as soon as they got home from vacation and asked the crew at Abracadabra about the potential for opening a place of her own here in Michigan’s Great Southwest. They returned to Florida in February to work with Nico and his colleagues and learn the trade. Now, he’s here to help continue the training and get the business up and running.

The new Fire & Ice Pizza & Cream is an eye-popping place in its own right, with colorful concrete creations, nooks and crannies, seating for probably around 100 people, a small party room, a large indoor soccer field/sport court, and game room, kid’s play house for the littler kids, and plenty of good things to enjoy.

Todd & Lori Costanza bought the former Rental Branch Decorative Concrete Showroom from Mike Branch who moved his business down the road closer to I-94. Lori also owns and operates Private Duty Homecare, also on Niles, but closer to town alongside the Neon Grill. Todd works for the family farm, Russell Costanza Farms of Sodus, a major produce supplier to Meijer and others. The Costanza’s two 17-year old daughters will be working there and potentially running the place in the future, with Todd & Lori sharing administrative and management responsibilities while continuing to maintain their individual jobs on the local front.

The new place will operate from 11am until 10pm seven days a week, although weekend hours will likely be adjusted a bit to open later in the day. They are staffed by a crew of 20 full and part-time employees.

In addition to flash frozen ice cream treats and soft drinks, Fire & Ice will also offer an array of wood-fired pizzas from the special oven at the center of the kitchen area.

Families are going to love this place with lots of play areas to keep the kids occupied, and if the ice cream melts while they’re playing, it can actually be refrozen in seconds, good as new! Be sure to check it out soon. Opening day is coming Monday.